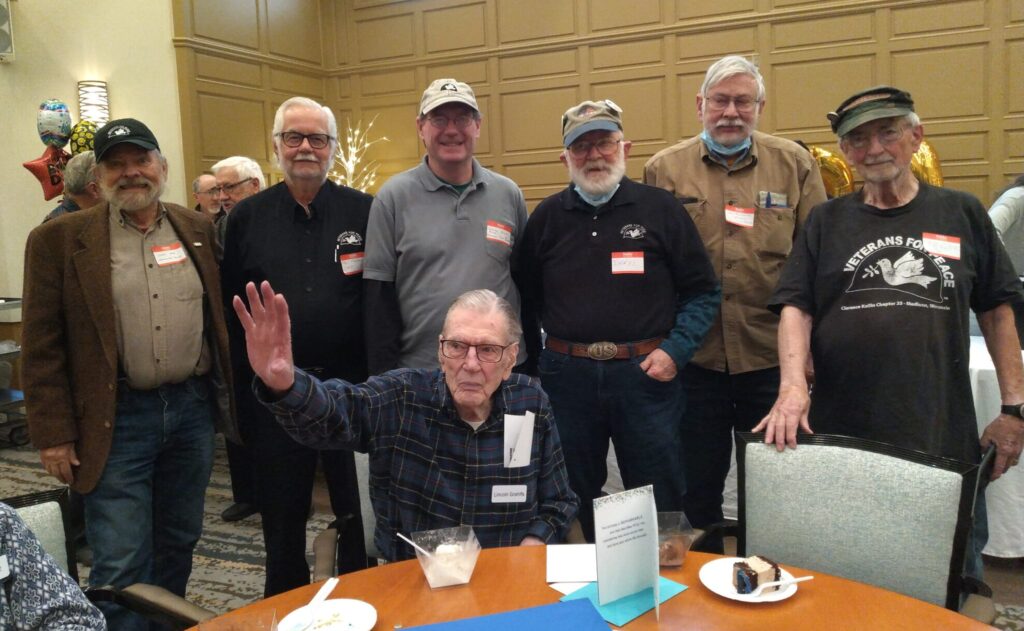 A copy of Lincoln’s book can be found here at the following link or Amazon or where Veterans for Peace Madison might be tabling.

Undaunted: The Story of a United States Navy Tug and Her Crew…by Grahlfs, F. Lincoln

Members of Madison Veterans for Peace joined a large crowd today to celebrate the 100th birthday of Lincoln Grahlfs, our oldest member currently. Lincoln served in the US Navy during and after World War II.

After the war, he was at the infamous US nuclear weapons tests on Bikini and Eniwetok Atolls in the Pacific, receiving much radiation. Many of his buddies died too young, but he has survived and fought for better health care for veterans suffering from nuclear exposure. During the Summer of 2022, US President Joe Biden called him to Washington DC, to witness the signing of a bill mandating that care.

It was a wonderful party for Lincoln

Who celebrated his 100th birthday

With so many friends and family.

Lincoln was recently honored with
A personal meeting with President
Biden at the White House for his work
With the veterans who survived the
Atomic testing programs held after
WWll.

Members of Madison’s Clarence
Kailin chapter 25 Veterans For Peace
Were on hand to honor their most
Distinguished member. 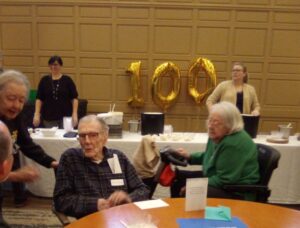 A War Veteran Recounts His Journey to Becoming a Sociologist (asanet.org) 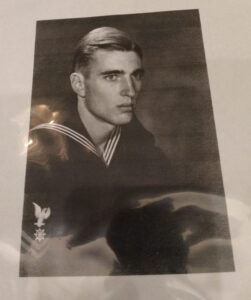 Lincoln during the war. We were all so young during our wars. Some are forever young. 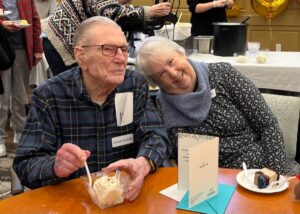 “F. Lincoln Grahlfs, a World War II Navy veteran, is a sociologist who has studied the effects of radiation exposure on United States military veterans. He has served as president of the National Association of Radiation Survivors.” 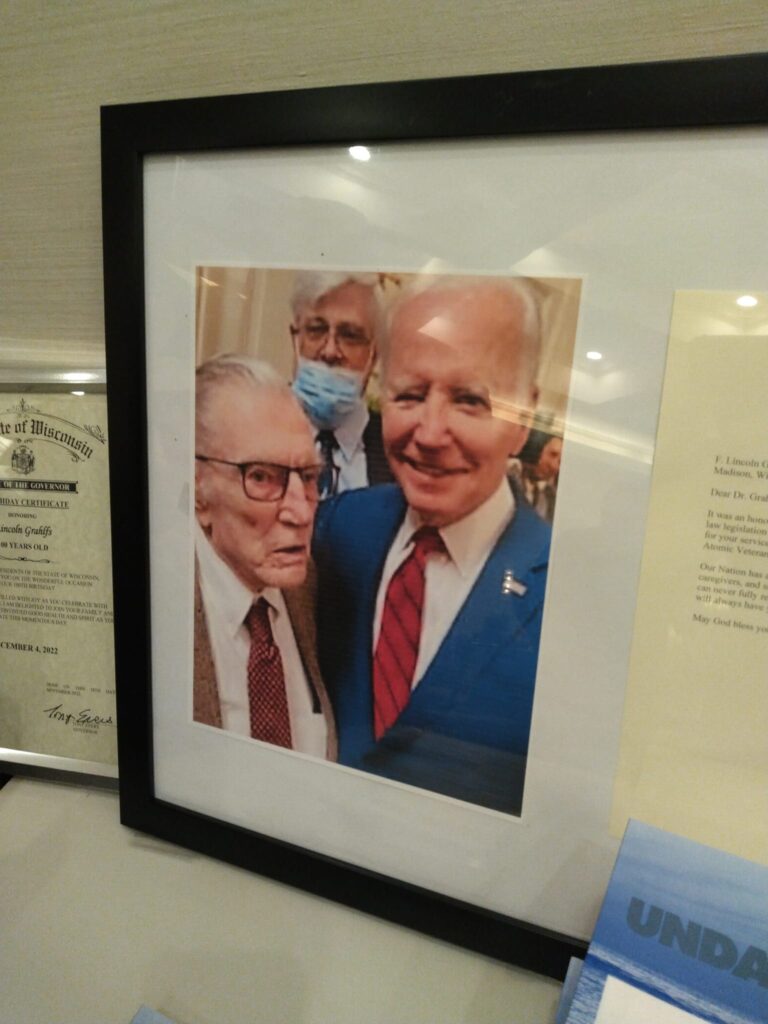 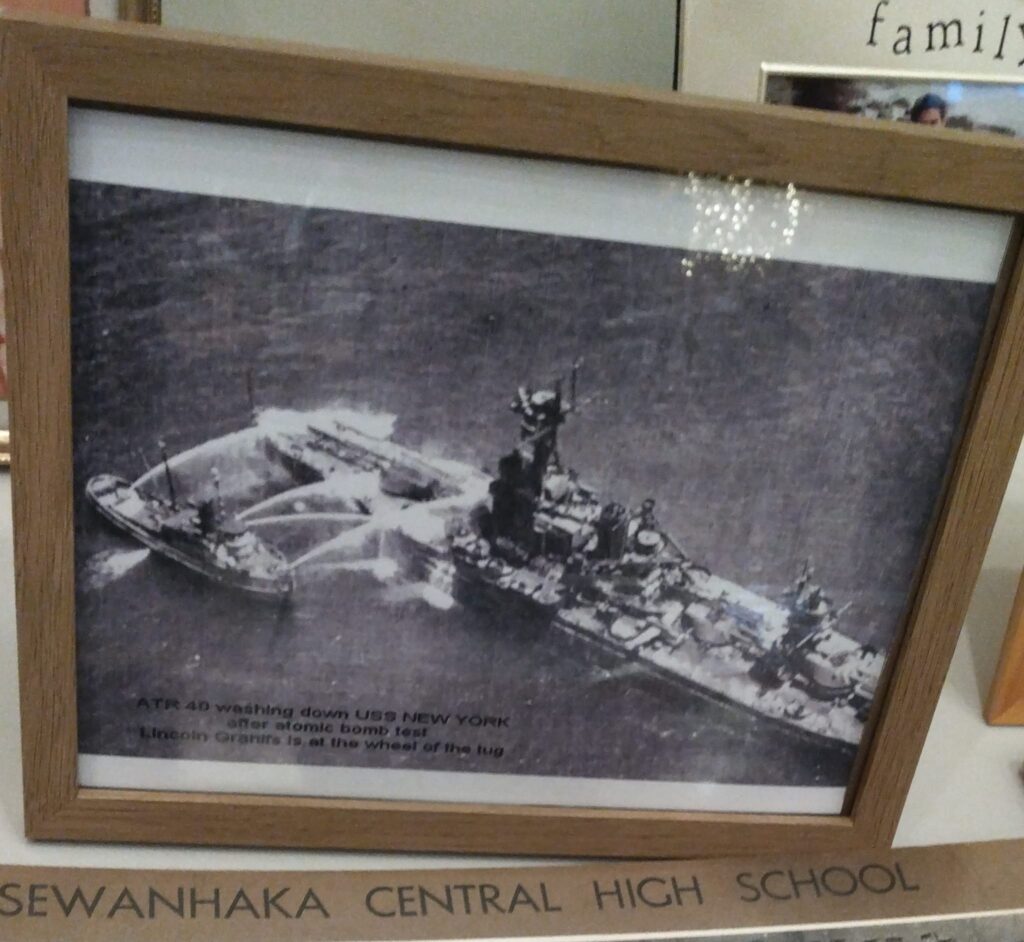 Lincoln’s ship putting out fires on one of the expendable ships that was anchored near ground zero of an atomic bomb test.

“The United States conducted nearly 200 atmospheric nuclear weapons development tests between 1945 and 1962 spreading radiation across several Western states and the South Pacific. All the while, the Atomic Energy Commission insisted to surrounding residents: “There is no danger.” 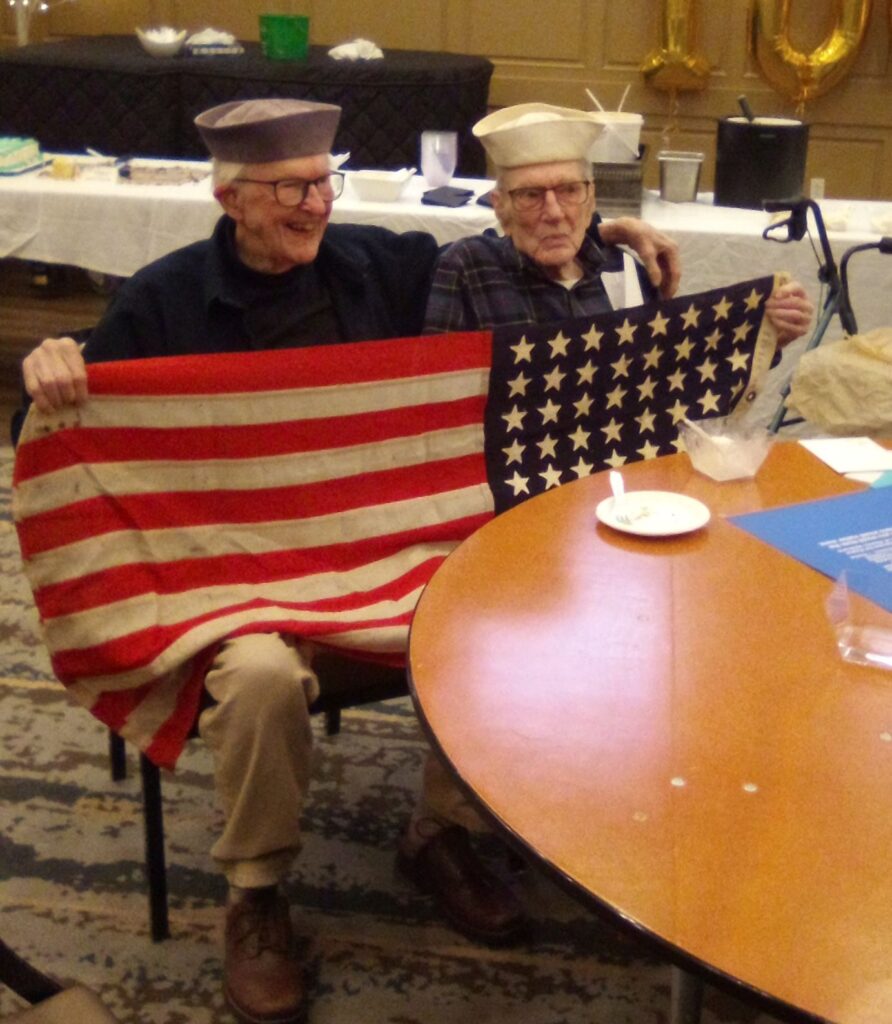 “Floating on a U.S. Navy tugboat in the Pacific Ocean nearly a year after the end of World War II, Lincoln Grahlfs and his shipmates could hear a countdown over a radio, signaling their mission would soon begin.

The sailors were told to cover their eyes with their hands before the countdown hit zero. Four hours later and wearing no protective gear, Grahlfs and his ship traveled 11 miles through Bikini Atoll to ground zero of where the United Stated military had tested a nuclear weapon.

The crew was tasked with putting out fires on empty ships used as targets and towing those that hadn’t sunk to shallower waters for examination. More than 75 years after cleaning up the aftermath of two atomic tests in the central Pacific, the Madison resident has used his personal experience to advocate for ridding the world of nuclear weapons and on behalf of fellow veterans exposed to dangerous radiation…”

‘You can’t live with them’: Madison WWII vet exposed to atomic testing warns about nuclear weapons 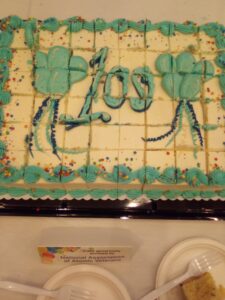 Check out more from this Atomic Veteran and  Veterans for Peace

“Observers on the bridge of the USS Mt. McKinley watched a huge cloud mushroom after an atomic bomb test in the Marshall Islands in July 1946. Four hours later, Lincoln Grahlfs, a U.S. Navy veteran, went into ground zero to help put out fires and tow away damaged ships. Grahlfs is a long-time member of the Madison Veterans for Peace chapter. Grahlfs says he’s seen the initial horror felt over the use of nuclear weapons on Japan fade from the public conscience as other concerns take precedence. “Part of my job is to remind them these things can wipe us all out.”

The Cost of War & Militarism for the Climate Crisis

WHAT: 350 Madison Monthly Meeting
WHEN: Monday, February 7, 2022, 7:00–8:10 pm, followed group discussions
HOW: Register in advance for the meeting here. After registering, you will receive a confirmation email containing information about joining the meeting via computer, tablet, or smartphone. 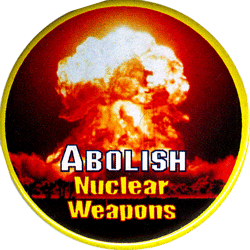 Join 350 Madison and Quakers on Monday, February 7, to hear James Janko of Veterans for Peace speak about militarism and the climate crisis. This is an excerpt from what Jim, a medic in Vietnam, has written about why he joined the Veterans for Peace Climate Crisis & Militarism Project:

“In Viet Nam, I saw first-hand the destruction in the Cu Chi and Tay Ninh countryside, the forests and fields razed by bombs and defoliants, the land seemingly stripped of all life for as far as the eye could see. Sometimes I felt we were fighting the earth itself…. The destruction occurring because of climate change dwarfs the almost indescribable devastation I witnessed in Viet Nam. No organization in the world emits more greenhouse gases than the Pentagon. For this reason, issues of militarism and the consequences of militarism need to be at the forefront of the climate movement.”

As part of his presentation, he will talk about the environmental impact of the F-35s, something that he talks about with all groups, but of particular relevance for us at 350 Madison. His talk is co-sponsored by the Madison Monthly Meeting of the Religious Society of Friends (Quakers).”

Why the Pentagon Is Equipping the F-35 With a Thermonuclear Bomb
Kyle Mizokami
Fri, November 5, 2021

“The F-35 Joint Strike Fighter is nearly certified to carry a new thermonuclear weapon, the B61-12.

Although the U.S. military has a variety of ways to deliver nuclear weapons, there are only a handful of ways to use them on the battlefield.

Using a crewed delivery system ensures there is a person in the loop for the entire flight who can execute last minute instructions.

The F-35A Joint Strike Fighter is nearly ready to take on a new mission, that of a nuclear-capable bomber.

The Air Force has completed the flight testing to ensure the F-35A can safely—and reliably—drop the B61-12 thermonuclear bomb. The combination of crewed aircraft and nuclear bomb will ensure the U.S. government would have options in the event of a crisis, including one where a nuclear bomb could be literally recalled at the last second. 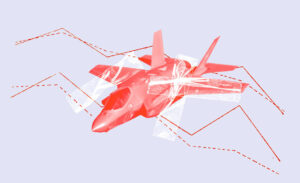 Today, tactical nuclear weapons are delivered by aircraft and submarine-launched missiles. The most numerous U.S. tactical nuclear weapon is the B61 series of bombs, a series that has been in continuous use since the 1960s. In the 2010s, the U.S. military developed a new B61 bomb, the B61-12. The B61-12 is not only more accurate, it’s designed to penetrate earth and concrete to strike underground facilities—think North Korean underground leadership bunkers, Iranian nuclear facilities, or similar targets.

This penetrating capability allows it to be more effective at nuking underground threats with less explosive power. The B61-12, rebuilt from older B61 series bombs, has a smaller yield and in fact has a “dial-a-yield” mechanism that allows for the yield to vary from .3 kiltons, 1.5 kilotons, 10 kilotons, and 50 kilotons.

One of the most important principles behind nuclear weapons is the idea of maintaining positive control over them at all times, as much as possible, up until the moment of detonation. This is not only a safety feature, it allows decision-makers increased flexibility under incredibly stressful circumstances.

A crewed aircraft makes an ideal platform for maximum control. With a crewed delivery system, the President of the United States could order a F-35A armed with the B61-12 to strike a target, then change his or her mind if the circumstances change. If the enemy suddenly calls for peace, the strike can be called off. This “recallability” is replicated at the strategic level with bombers like the B-2 Spirit, and the F-35A/B61-12 combo offers war planners the same capability at the tactical nuclear level. The F-35A’s stealth gives it a greater chance, unlike legacy aircraft like the F-15E Strike Eagle, of successfully penetrating enemy defenses and reaching the target.

What kind of targets could a F-35A drop a nuclear bomb on? Thanks to America’s overwhelming conventional firepower, it’s difficult to see the U.S. use nuclear weapons against non-nuclear targets. One target could be the location of a Russian missile command post, nuking it to sever the chain of command between Moscow and its own tactical nuclear forces. The actual missiles could be another target. If tactical nuclear weapons are already in use, a F-35A could dial the yield down to 1.5 kilotons and strike conventional targets, such as headquarters units, supply depots, and marshalling points for conventional forces. 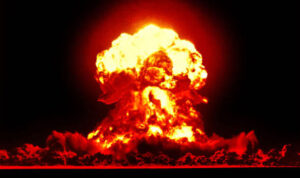