Video : Project on Government Oversight : The F-35 in 2 Minutes

The point and the goal of the US government is to enrich the ruling elite, those in the 1% of the 1% who continue to consolidate wealth.

When your legislators are unable to achieve the most basic tasks, remember what their real purpose is.  When our presidents fail at most everything but enriching the biggest bank owners, some of the richest people on the planet, realize their purpose.  When the courts give what you think is justice largely to a bunch of old white guys, know what they are doing.

We do not have a quality healthcare system for our people. Our public schools and other commons are constantly under attack by those who want to steal those assets. We have a huge problem where worker wages are stolen, we haven’t enough food that makes it into the mouths of our children, the government can’t enforce laws on the powerful…

But the US can drop a bomb on anyone at anytime, and once in a while it might be a bad guy. 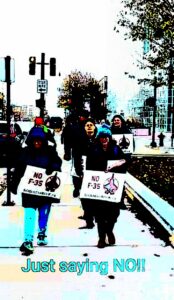 The F-35 and Other Legacies of Failure – Dan Grazier

“For 20 years, the Pentagon’s program to develop the F-35 aircraft appeared invincible, even as the project hit repeated delays and went well over budget. And then, just within the span of a few weeks, official support for the F-35 has seemingly evaporated. It could not come soon enough.

At the end of the Trump administration, the acting secretary of defense called it a “piece of…” The Air Force chief admitted the F-35 would never be able to live up to its original purpose. And now, the chair of the House Armed Services Committee said we should stop throwing money down the F-35 “rathole.”

This all comes as the program is rightfully on a list of programs facing a Pentagon review that could result in recommended cuts to the total number of aircraft to be purchased. It signals a tectonic shift in support for a program that previously received near universal official support from the Pentagon and on Capitol Hill.

This shift is due to the sudden realization in Washington, despite years of warnings, that the F-35 is too challenging and costly to maintain.

And if there are to be major changes to the F-35 program, now is the time to do it. Otherwise, if the program does manage to squeak through operational testing, Congress could then authorize a bulk purchase of F-35s, something the program office and the manufacturer have wanted for years. But even if the plane is technically deemed operational, such a move would saddle the services with hundreds of flawed, high-maintenance aircraft, which will depress readiness rates, further strain the already harrowed maintenance crews, and require years of costly retrofits.

At the very least, further production should be halted until the program completes operational testing. Testing continues to reveal design flaws in the F-35 —at last count in January, there were 871 of them which is only two fewer than the year before. Until the testing process is complete and engineers work through solutions to these problems, the F-35s purchased now will be built with these flaws, and then later require extensive and expensive modifications later on to fix problems that have yet to be revealed in the testing process.

The usual suspects in the defense industry have responded forcefully to the threat to the program on which they have staked their future. They are arguing that the services need to purge themselves of older, so-called “legacy” systems—the typical argument made by defense contractors to make sure there is little choice but to purchase new weapons from them.

But there is nothing inherently wrong with older aircraft. As long as they are maintained properly, a well-designed aircraft can provide useful service for decades. The B-52 is an excellent example. There are even 172 DC-3 airliners that debuted in 1935 that are still flying and making money for their owners.

Pentagon leaders are right to review troubled programs, and they shouldn’t allow a program to drag on for 20 years before doing so. And if the Pentagon’s budgeteers want to make cuts, they shouldn’t start with weapons like the F-16 and A-10 that continue to prove their worth in combat. Air Force chief General Charles “CQ” Brown Jr. said recently that capabilities and not age should be the central question of any review. “I really think about it from a capability perspective. Is that capability going to be relevant today, relevant tomorrow? And if it’s not going to be relevant tomorrow or it’s going to be, you know, overly expensive to make it relevant for tomorrow” it needs to be retired.

The F-35 is the poster child for programs that are too expensive to be made relevant for the future. It should have been canceled more than a decade ago with its 2009 Nunn-McCurdy breach when the development and procurement costs doubled. Cutting it off now could save about $200 billion just in acquisition costs.

Along those same lines, the Pentagon would have saved billions by killing off the “legacy of failure” programs like the Littoral Combat Ship and Zumwalt-class destroyers when it first became apparent that they were falling far short of expectations. Taxpayers paid $30 billion for a versatile class of small surface ships with the Littoral Combat Ship program. What they got was a fleet of fragile boats that can’t perform many of the roles for which they are intended, with four of them already on their way to being mothballed. The Navy is spending more than $23 billion on the Zumwalt program, a ship design that failed to perform its originally intended role.

Uniform and civilian military officials need to be reminded that it is not the end of the world to kill a new program. In 2011, the Marine Corps cancelled the troubled Expeditionary Fighting Vehicle after sinking $3 billion into the program because of spiraling costs and technological failures. After a reset, the service developed the far simpler Amphibious Combat Vehicle for a fraction of the cost.

Spending our grandchildren into poverty pursuing unworkable technological boondoggles is not the right way to compete with our potential adversaries. In all matters military, the simplest possible tools are always the most effective. Decision makers in Congress and the Pentagon should be far more skeptical when defense contractors make lavish claims about technology they haven’t yet demonstrated and have the courage to stop programs when it becomes obvious they are failing.”