Zoom Panel and Discussion on The Cost of War

We have an excellent lineup of guest speakers and plenty of time for questions from the audience.

All wars have large costs, which the political, financial, and governmental elites instigating the conflicts would rather the citizens minimize –but pay for. With a “volunteer military”, outsourcing, drones, and “smart bombs”, the war-makers attempt to hide the costs of war. The true story, however, is much grimmer.

Register to attend and automatically get a link for the event
https://us02web.zoom.us/meeting/register/tZIqdu2orjMjHNzYgbjtDLL8anAzPJxlsrJWf
****************************************
Please plan to join us and to hear from our four panelists:
***Veteran of the “War on Terror” Brittyn Calyx who will talk about the cost of war on the individual veteran and the impact of war on their own life.
***Vietnam veteran, artist, and peace activist David Giffey, who will speak on the societal costs of war,
***Dr. Eileen Ahearn, a long-time psychiatrist at the VA in Madison, Wisconsin who will take a look at war and moral injury and
***Rev. David Couper, who brings his experience as a veteran, former Madison police chief, and Episcopal priest, and will discuss the militarization of policing.

Each panelist will be given about 10 minutes to speak, followed by Q&A. We will use the Zoom chat box to field questions from our panelists. 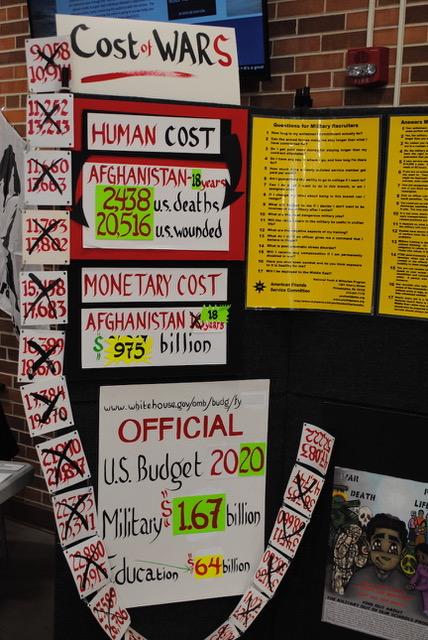 Update for above picture:

If you look very carefully, you will see it says: “$1.67 billion” referring to military spending. It should be “trillion” instead of “billion.” I updated the sign as I must do often (because military spending and body counts get higher every year). But the tape gave out and the old “billion” was exposed. An alert teacher at Baraboo High School questioned it, and I have since corrected the sign. It now states that the military budget for 2020 is $1.67 TRILLION.

My counter recruiting visits to Southwestern Wisconsin high schools never fail to remind me of the constant need for a peace presence among young people. I am returned to the uncertainty and indifference I felt when I was young and let myself get drafted and eventually sent to the American War in Vietnam. By nature, youth is apathetic and dismissive of very important decisions, and overcome with a sense of bravado.

Today I spent the lunch hours counter recruiting at Dodgeville High School. Protocol requires that I remain at my table and wait for students to approach. Then I offer information about alternatives to the military and try to warn students that “the military is not just a job.” This is the 11th year our Chapter 25 has offered a scholarship for the essay contest winner at Dodgeville, and my 11th year counter recruiting in Dodgeville. The staff is very helpful and kind. The administration has changed in the past decade. Twelve years ago, it was necessary to consider legal action when Veterans For Peace was denied the right to counter recruit in Dodgeville High School.

The tradition of militarism in American culture is evident in the high schools I visit. Today a student asked me if I was “anti-military or anti-war.” I assured him that I was “anti-war.” How could I be opposed to people in the military, since I was once one of them, I asked. Within minutes two students who, I presume, were friends of his approached me and very politely told me they had enlisted. I reminded them that the purpose of all U.S. military branches is to wage war. I showed them copies of the contract they may sign which removes all their rights to self-determination. I wished them well. The war in Afghanistan is now in its 19th year. Neither of those boys were born when it began. They have, I believe, become inured to war by its constant presence.

Last week I read excerpts from Long Shadows: Veterans Paths to Peace at an event in Madison. In the book, the late Dr. James Allen, a longtime peace activist who was drafted into the War in Korea, recalled someone saying, “We’ve made a little progress in the last few thousand years because in the old days when the conquering army came in, they usually killed everybody in the city. Now we just say we want to kill the soldiers.”

Visiting high schools, offering scholarships for essays on the topic of peace, meeting young students, worrying about our grandchildren…these are important reasons for supporting the work of Veterans For Peace. Today at Dodgeville High I talked to half a dozen students who were interested in writing essays for our contest. I discussed war and peace with several teachers who were eager to read our literature and to learn more. I gave two students copies of “Addicted to War,” a graphic history of U.S. involvement in wars.

Later this week I’ll visit Baraboo High School. Next week I’ll be counter recruiting in Boscobel and Richland Center, and then Muscoda. I’ve already been to River Valley High School in Spring Green. Then I’ll start over again hoping to let young people know that the world will be more peaceful if they remain civilians after graduation.

As veteran Clarence Kailin, namesake of Chapter 25, said: “There’s a lot of work to do.” 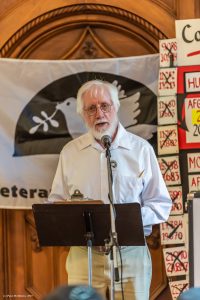 “I had a good/busy day in Dodgeville HS during lunch hours today. I spoke with at least five seniors who are very interested in the essay contest, a couple of hecklers, and two seniors who said they have enlisted. But they listened when I told them about options. And several teachers had conversations with me also.”  – David Giffey

What you should know before joining the military. 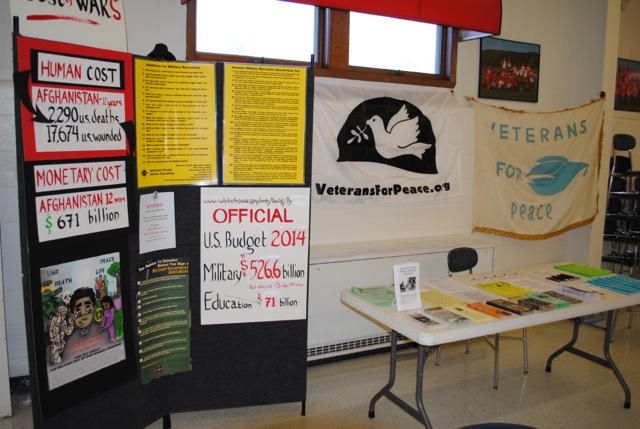 Chapter 25 counter recruiters have met with students at Boscobel High School for several years. This is the educational display set up in the cafeteria which encourages students to consider peaceful civilian alternatives to military recruitment. (Photo by David Giffey) 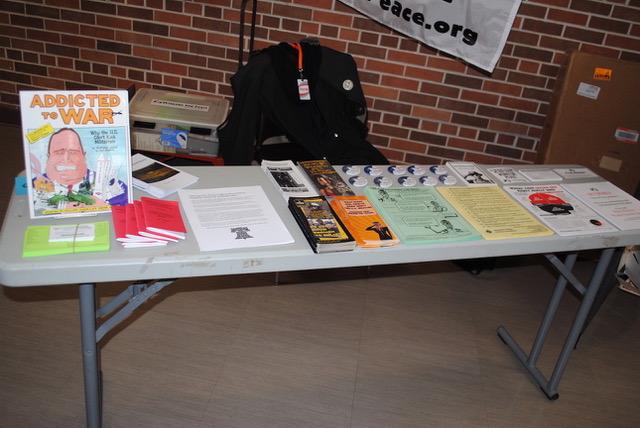