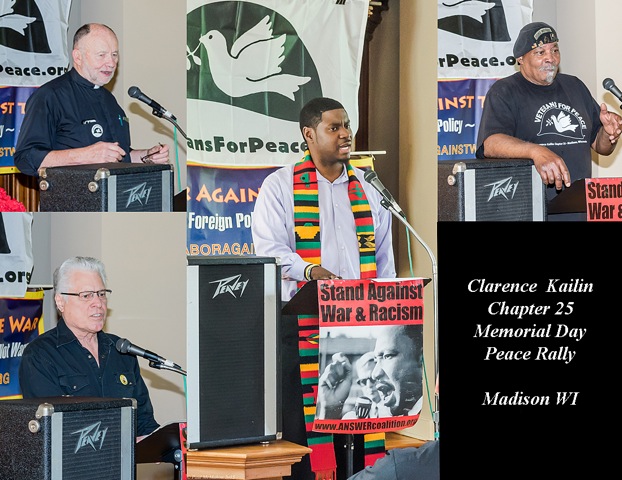 The historic Gates of Heaven building resounded with applause and affirmation during the annual peace rally sponsored May 25, Memorial Day, in Madison, by Clarence Kailin Chapter 25 Veterans for Peace.

Four featured speakers delivered important and thoughtfully prepared comments, high school student scholarship winners were honored, and names of war casualties were read to live bagpipe music as the audience of 100 people received red carnations to be placed at the Lincoln Brigade monument at James Madison Park. The Gates of Heaven building, a former Jewish Synagogue, was moved to its present site at the park and served as a home for the peace rally.

A somber display – The Memorial Mile – also was erected by Chapter 25 members on May 23, and was scheduled to remain in place along Atwood Avenue until May 30. The Memorial Mile consists of 6,675 symbolic grave markers, which stretch a saddening and impressive distance along the street to be viewed by thousands of motorists, cyclists and pedestrians.

The peace rally began with a stirring set performed by the band Old Cool.

Veterans for Peace member David Couper, an ex-Marine, and former Madison police chief and advocate of community policing, told the crowd: “Excessive militarism is dangerous in a free society…we have seen it manifested in our nation’s police. As soldiers, we fought an enemy, but police in a society such as ours must be our guardians, especially of those among us who are most vulnerable…” After Couper retired from his peace keeping work he was ordained a priest in the Episcopalian Church. His invocation was included in his thoughtful comments.

Activist and labor leader David Newby, president emeritus of the Wisconsin State AFL-CIO, described the proposed Trans Pacific Partnership (TPP) trade deal as being devised in secret to benefit powerful corporations. “Memorial Day is such an important day,” Newby said, “for remembering those killed in this nation’s wars…It’s an important day for remembering too that the reasons for our being in these wars are so often not what we are told. So often it has been not the American people who we went to war to protect, but rather powerful corporations whose interests and profits were considered more important than the lives of the women and men sent to war.”

Everett Mitchell, a social justice advocate, attorney, activist, scholar and pastor at the Solid Rock Baptist Church, devoted some of his comments to lessons taught about war and peace by Dr. Martin Luther King Jr. As injustice and police violence reach into the lives of African Americans in Madison and communities across the U.S., Rev. Mitchell repeated a message for peace and justice activists: “Until there is justice, we can’t stop.” 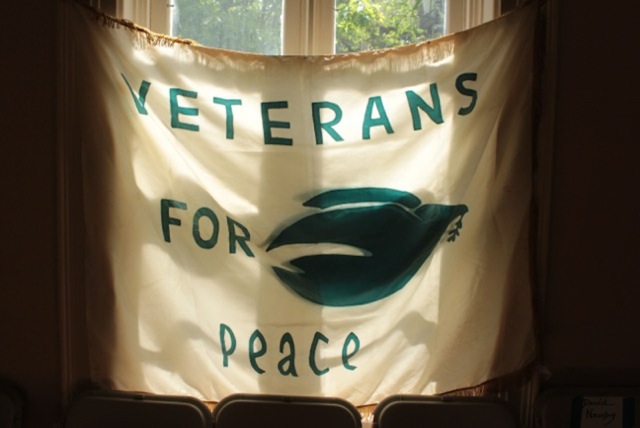 Chapter 25 Veterans for Peace is heir to anti-war history. Beginning in 1967, this hand-sewn flag made in Madison, Wisconsin, was used by Madison Veterans for Peace in Vietnam at numerous public demonstrations and protests against the war. Chuck Goranson, a Vietnam veteran, was a grassroots organizer of the group. “Vietnam” was dropped from the group’s name in 1970, when the war was expanded into Cambodia and Laos. Clarence Kailin Chapter 25 Veterans for Peace is a 21st century renewal of the earlier veterans for peace organization. This photo, by Chapter 25 member Phillip Fransen, was taken during the peace rally May 25, 2015, at the Gates of Heaven in James Madison Park. The aging flag serves as a reminder that veterans have long been active in the peace movement. (Photo by Phillip Fransen)

Two of seven 2015 high school scholarship winners, Lyric Simonson and Jose Hernandez, read excerpts from their prizewinning essays titled: “Why I Believe War Is Not the Answer.” This year, Chapter 25 provided a total of $4,200 in scholarships to seven high school graduates. A record 39 students from seven high schools in Central and Southwestern Wisconsin wrote essays for the contest.

Closing comments by Chapter 25 member and Vietnam War veteran Will Williams pointed out the injustices of war that he realized after serving in war. Williams emphasized the importance of educating and supporting young people in order to overcome traditions of militarism and violence.

The peace rally ended with an invitation from the family of Clarence Kailin, namesake of Chapter 25 and a veteran of the Abraham Lincoln Brigade from Madison, to join in scattering some of Clarence’s ashes near the monument at the park. Norman Stockwell, of WORT-FM, offered the invitation on behalf of Clarence’s family, some of whom attended the peace rally.

Names of Wisconsin residents killed in Iraq and Afghanistan, and those of civilian casualties were read.