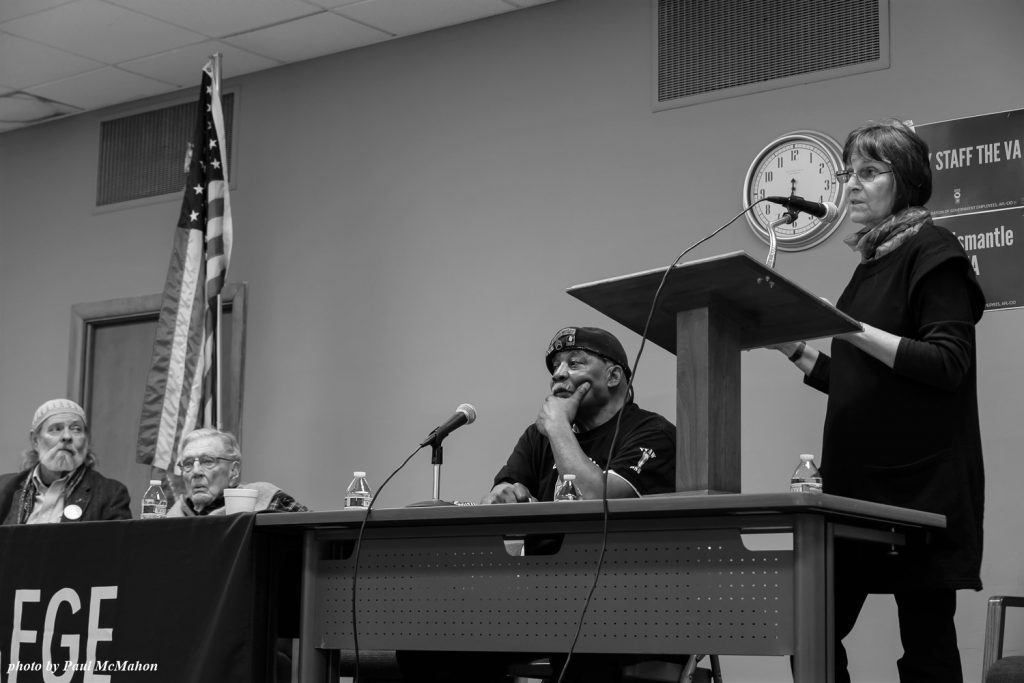 Several experienced and VA-knowledgeable VFP members participated in a public information meeting on February 28, 2018 at the Madison Labor Temple about the future of VA medical care. The session focused on an issue that is critical to the future care of veterans in this country—namely the growing efforts to privatize the VA for corporate profit. There is a debate raging in Washington DC about how veterans should receive their health care. While there have always been attempts to privatize parts of veteran care, there have been renewed efforts after employees at the Phoenix VA blew the whistle on management fabricating patient wait lists and putting veterans at risk. Private industry and a Koch brothers-funded organization called the Concerned Veterans of America saw their opportunity and began an all-out assault campaign to take down the VA and farm it out to the private sector. The movement has been gaining support from both sides of the aisle in Washington under the guise of “helping our needy veterans” and “thanking them for their service.”

Perspective at the meeting was presented by Suzanne Gordon. Gordon is an American journalist and author who writes about healthcare delivery and health care systems and patient safety and nursing. She is author, co-author or editor of 18 books. She is currently working on a book about the innovations and clinical care at the Veterans Health Administration.

VFP members Lincoln Grahlfs, Larry Orr and Will Williams all spoke and testified about their excellent treatment at VA facilities. Ms. Gordon urged all present to contact Senators Baldwin, Johnson and their representative (Mark Pocan) to counter the privatization moves. Thanks to all who participated and helped us be better informed. Thank you especially to the American Federation of Government Employes for sponsoring this session and for some of this edited text.

More photos from the event can be found here.

Madison’s Veterans Hospital will hold a town hall meeting at 6 p.m. Sept. 23 for veterans, families, staff and the media.

“This will be a great opportunity for veterans to hear directly from hospital leaders about issues that concern or affect them,” according to an announcement this week on the hospital’s Facebook page.

The VA has a 14-day target for wait times. Veterans in other states have died while waiting for care , leading to nationwide review.

The Madison VA hospital had a “significant increase in patient demand” and vacancies in primary care provider positions, resulting in the long wait for new patients, spokesman Tim Donovan said. The providers have been replaced or are being replaced, Donovan said.

In the 2013 fiscal year, patients made 1,404 complaints to the hospital’s patient advocate office, he said. Of those, 261 were concerns about the timeliness of access to care and 302 were about other aspects of patient care, he said.

More than 40,000 veterans were cared for in fiscal 2013 at the hospital and its clinics in Baraboo, Beaver Dam, Janesville, Madison and Freeport and Rockford, Illinois. They accounted for nearly 400,000 outpatient visits.

Local members of Veterans for Peace gathered Thursday to voice concerns about the “massive under-funding, massive under-staffing and effort to privatize” the Veterans Administration that they said has been occurring for the last 15-20 years.

The VA currently enrolls 9.1 million of the estimated 21.6 million veterans living in the U.S.