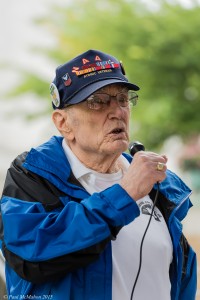 On July 16, 1945, in the New Mexico desert, the first atomic bomb was successfully detonated. A mere three weeks later, on the 6th and 9th of August, two more of these weapons were exploded over the Japanese cities of Hiroshima and Nagasaki. This precipitated the already imminent conclusion of war between the United States and Japan.

The reaction to the destruction, and the overwhelming death toll in the two Japanese cities was overwhelming. There were widespread calls from both scientists and lay persons for such weapons to be outlawed.

But, to use a time-worn expression, the Genie was out of the bottle; there were elements in our government who were intrigued by this new line of weapons. So, within two months the US Navy was calling for volunteers to participate in a program to test the effectiveness of atomic weapons against naval vessels. The tests were to take place at a small Pacific atoll the following spring.

The number of volunteers fell far below expectations, so personnel were simply assigned to this operation, and many others that followed, both in the Pacific and in an unpopulated area of Nevada. These tests continued until the atmospheric nuclear test ban was negotiated in 1962. During that period literally hundreds of nuclear weapons were detonated.

The most conservative estimates of the number of soldiers, sailors and marines who were exposed to the potentially harmful effects of ionizing radiation in these weapons tests at somewhat more than a quarter of a million. Many of them have endured serious health consequences; among the others, there is a nagging worry. These men, who refer to themselves as Atomic Veterans, are generally proud to have served their country. They feel, however, that they were forced to be subjects in a risky experiment for which they were denied the option of informed consent.

In light of the above facts we deem it appropriate to designate July 16th, in this and ensuing years, as ATOMIC VETERANS RECOGNITION DAY.