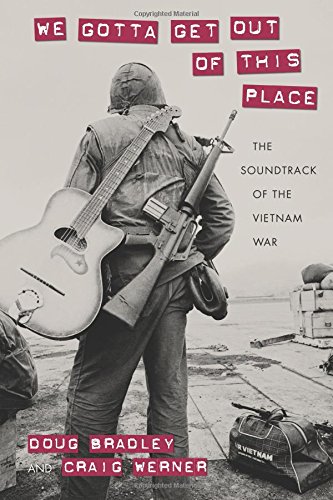 Madison Veterans for Peace brought the karma big-time to the authors of We Gotta Get Out of this Place: The Soundtrack of the Vietnam War. Not only was the turn-out gratifying at the spacious community room at the Madison Urban League on Wednesday, Dec. 16, 2015. Not only was the 60 minute presentation well met by solid applause, many books sold and refreshments plentiful—the pièce de la résistance materialized a few days later when Rolling Stone Magazine named the book as the top music book of 2015. To quote RS: Doug Bradley and Craig Werner’s account of music’s connection to the Vietnam War is intimate and deeply informative, with a scope that encompasses both the war itself and the way that music has helped raise awareness of veterans’ issues long after its end. Read more: 10 Best Music Books of 2015.

A great evening of shared discussion with Chapter 25 and many members of the public.  Congratulations to the authors, and thanks to all who were able to attend.