“More than four years after the state Department of Natural Resources warned of toxic “forever” chemicals at former firefighter training sites near the Madison airport, city, county and state officials have yet to begin cleanup amid disputes over who is responsible.

In June 2018, the DNR notified Dane County, the city of Madison and the Wisconsin Air National Guard they may be responsible for PFAS contamination at the sites, which were known as “burn pits” used for firefighter training between the 1950s and 1980s. 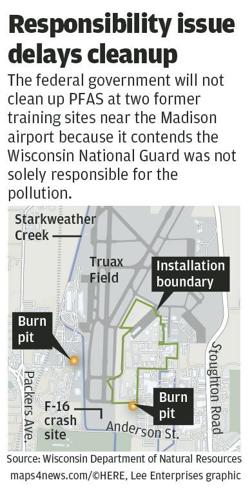 The sites on Darwin Road and Pearson Street both drain into Starkweather Creek, which flows into Lake Monona, where health officials have warned anglers to limit consumption of fish because of the chemicals, which have been linked to illnesses including high blood pressure, low birth weight, developmental delays and most recently liver cancer.

The DNR has also ordered the city, county and National Guard to clean up PFAS from other parts of the airport, which is home to Truax Field.

For years, the city and county have deferred to the National Guard, which is investigating PFAS contamination under the federal Superfund law, a process that could take a decade for actual cleanup work to begin.

But when the National Guard Bureau submitted a final plan last spring, the burn pits were not included because the bureau said it was not solely responsible.

Now the DNR is again asking the city, county and Wisconsin National Guard to further investigate the site and determine what, if any, cleanup is required.

The delays come as industry groups have challenged the DNR’s authority to require cleanup of PFAS. A Waukesha County judge ruled in April that the agency must first go through a 2½-year rulemaking process to list the chemicals as hazardous substances, though his order is on hold while under appeal.

Maria Powell, founder of the Madison Environmental Justice Organization, which helped bring the burn pit pollution to light, said city, county and military leaders have been playing “hot potato” with the burn pits since pollution was first documented in the 1980s.

Powell said it would be “almost comical” if not for the “complete disregard” for people — many of them low-income people of color — who live downstream and eat the contaminated fish.

The Darwin Road site was used from 1953 until 1987 to train firefighters with the National Guard, city of Madison, and Dane County, as well as volunteer fire departments, according to a 1989 Corps of Engineers report.

Jet fuel, kerosene and other flammable liquids would be spilled on the ground, set on fire and then extinguished. The report documented an array of hazardous chemicals in the groundwater, though there were no tests for PFAS. 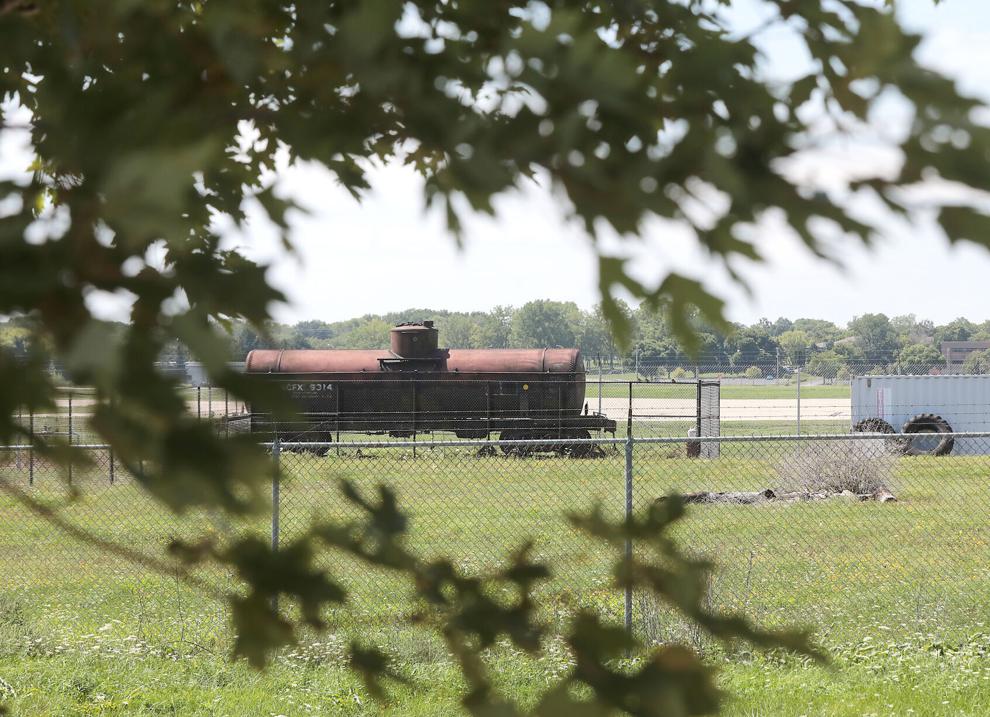 A former firefighter training area, known as a burn pit, on Pearson Street is one of two sites near the Dane County Regional Airport with high levels of PFAS. Both sites drain into Starkweather Creek, which flows into Lake Monona, where anglers have been warned to limit consumption of fish because of contamination.
JOHN HART, STATE JOURNAL

A second burn pit on Pearson Road was used by various fire departments starting in the late 1980s.

In 2018, the DNR notified the city, county and Guard that the sites were likely contaminated with PFAS and requested an investigation.

DNR spokesperson Sarah Hoye said the agency “didn’t have actual soil or groundwater data from the fire training areas demonstrating a release of a hazardous substance,” which it needs to require a cleanup.

In 2020, an environmental contractor found combined levels of two chemicals — PFOA and PFOS — at more than 68,000 parts per trillion in groundwater at the Darwin Road site and in excess of 20,000 ppt at the Pearson Street site. While Wisconsin does not regulate PFAS in groundwater, the standards for surface water is 8 ppt for PFOS and 95 ppt for PFOA.

Mayor Satya Rhodes-Conway told the DNR in 2019 that the city should not be responsible for the burn pits, but the DNR maintains that the city provided firefighting services for Truax Field and owned the Darwin Road site until 1974, when the federal government required the use of PFAS foams at military bases.

In March the City Council approved an agreement with the county and Guard to split the cost of a $30,000 investigation — not into the extent of PFAS contamination but “historical PFAS use” at the training areas.

According to the resolution, “a more complete understanding about the historical use of PFAS-containing firefighting materials at the Airport, including at and near the Burn Pits, will be helpful to the parties.”

Rhodes-Conway’s chief of staff, Mary Bottari, said the city is not contesting its responsibility for the site, though its share “has yet to be determined.”

“The city would still like to ultimately see a complete picture of the historical PFAS use at the airport, including at the two firefighting training areas, which a historical investigation could help develop,” Bottari said. “We do know, for example, that other local fire departments trained at the facilities. If we are able to identify those parties, they can help build a complete picture of historic use on the site.” 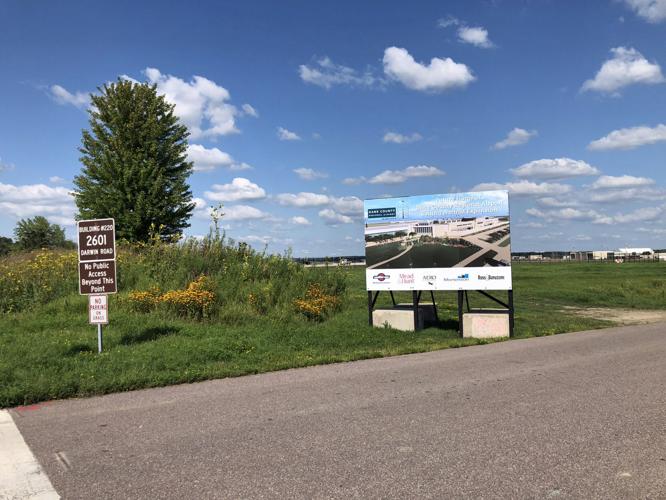 A former firefighter training area, known as a burn pit, on Darwin Road is one of two sites near the Dane County Regional Airport with high levels of PFAS. Both sites drain into Starkweather Creek, which flows into Lake Monona, where anglers have been warned to limit consumption of fish because of contamination.
CHRIS HUBBUCH, STATE JOURNAL

It’s not clear when that investigation began or how long it will take.

Bottari said it wouldn’t be “appropriate” for city staff to comment on cleanup plans because the land is owned by the county, which will play the “lead role.”

County officials declined to be interviewed about the cleanup plan.

In a written statement, airport spokesperson Michael Riechers said the city, county and Guard are developing “a plan to further investigate the firefighting training areas that will incorporate several facets including investigative efforts already completed and the pilot projects currently underway at the airport.”

Riechers said the county intends to update the DNR next week. 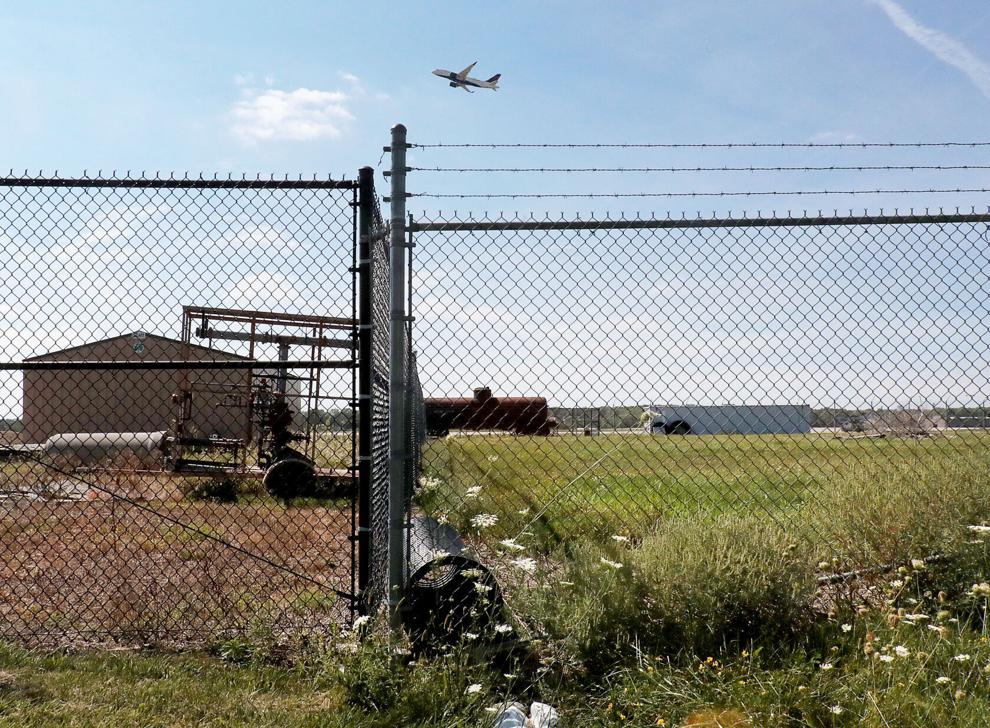 The state Department of Natural Resources has asked the city of Madison, Dane County and the Wisconsin National Guard to clean up firefighter training areas on Pearson Street, above, and Darwin Road that are contaminated with toxic PFAS chemicals.
JOHN HART, STATE JOURNAL

Maj. Leslie Westmont, a spokesperson for the Air National Guard, referred questions about the burn pits to the National Guard Bureau, the federal agency that excluded them from its cleanup plan for the rest of the base.

The National Guard Bureau did not respond to questions.

The bureau is overseeing the base cleanup under the federal Superfund law, a process that could take up to a decade for actual cleanup to begin.

The military has spent about $2 million so far investigating the extent of PFAS contamination at the base and expects the next phase of the investigation will cost almost $2 million more.

Lance Green, co-chair of the Friends of Starkweather Creek and a member of the Sustainable Madison Committee, said he’s been frustrated for years by the lack of action.

“PFAS is fairly new, but everybody knows about sucking the water out of the ground and getting the PFAS out,” Green said. “We need stronger action now to start lowering the contamination. That’s simple.”

DNR spokesperson Sarah Hoye said there’s not enough data to determine if the pollutants have spread from the site, but environmental watchdogs say there’s no reason to believe the highly-mobile chemicals would stay put.

“It can only spread,” Green said. “That’s the thing it does: spread.”

Green said it will take years to reduce PFAS levels in the lakes and fish, but only if the city, county and Guard take immediate action to eliminate the source.

The city council has approved spending $425,000 on a treatment system for one East Side well that was shut down in 2019 because of PFAS contamination, though the Madison Water Utility contended that Truax Field — not the burn pits — is the likely source of that contamination.

Earlier this year Dane County sued foam manufacturers in an attempt to recover “substantial costs” associated with cleanup of the airport.

The suit claims the defendants knew — or should have known — that using the foam, required by the Department of Defense and Federal Aviation Administration, would release PFAS to the air, soil and groundwater.

The lawsuit notes the chemicals, which can damage the liver, kidneys and nervous system, spread quickly in the environment, “contaminating soil, groundwater, and surface water” and are “readily absorbed in animal and human tissues.”

In emails with the county’s outside attorney, obtained through an open records request, assistant corporation counsel Amy Tutwiler discusses formulating media “talking points” for “how to respond to the concern that the health effects alleged in the complaint suggest pfas remediation should be occurring at a more rapid pace.”

Those talking points were not provided in response to the records request.

The county has since sued the DNR in an effort to strike conditions included in the airport’s stormwater permit intended to measure and limit PFAS in water that drains into Starkweather Creek.

The county contends the conditions are illegal because the DNR has already required cleanup under the remediation program and that they would be too costly.

County officials have said they did not know what the additional testing would cost, but according to documents obtained through an open records request it would be about $8,000 a year.

That case is on hold while the DNR conducts an internal review of the permit.”