Why is there so much bloodshed and “terrorism?” 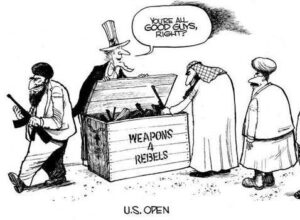 “They were so determined to take down Assad and essentially have a proxy Sunni-Shia war, what did they do? They poured hundreds of millions of dollars and tens, thousands of tons of weapons into anyone who would fight against Assad—except that the people who were being supplied were al Nusra and al Qaeda and the extremist elements of jihadis coming from other parts of the world…” [October 2014]