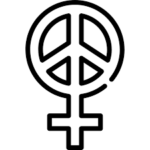 International Women’s Day (IWD) is a global day celebrating the social, economic, cultural and political achievements of women. The day also marks a call to action for accelerating women’s equality. This day has occurred for well over a century, with the first IWD gathering in 1911 supported by over a million people. Today, IWD belongs to all groups collectively everywhere. IWD is not country, group or organization specific.

In conflict, existing inequalities become magnified and social networks are broken down, making women and girls more vulnerable to sexual exploitation and violence. Yet, we don’t often hear about the women working for peace.

This Sunday is International Women’s Day. World BEYOND War is celebrating women dedicated to abolishing all war and replacing it with a security system based in feminism and peace. Leveraging frameworks like the United Nations Security Council’s Resolution 1324—which requires parties in conflict to prevent violations of women’s rights and to support their participation in advocating for peace—we work not only to affirm the critical role of women in the prevention and resolution of conflict but also to encourage and facilitate the role of women in abolishing all war.

“War is not women’s history,” says Virginia Woolf. “War is only an invention, not a biological necessity,” affirms Margaret Mead. 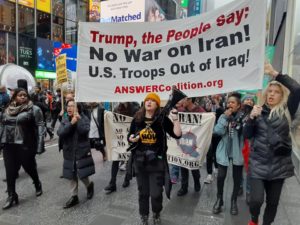 It was once said that it was impossible to abolish legalized slavery and dueling. Once deeply embedded in societies of their time, these practices are now, if not fully in the dustbin of history, universally understood to be eliminable. Now, let’s make war a thing of the past!”

In peace and feminist solidarity,

CODEPINK is a women-led grassroots organization working to end U.S. wars and militarism, support peace and human rights initiatives, and redirect our tax dollars into healthcare, education, green jobs and other life-affirming programs. 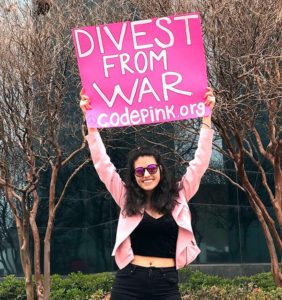 Founded in fall 2002 as a grassroots effort to prevent the US war on Iraq, we continue to organize for justice for Iraqis and to hold war criminals accountable. We actively oppose the continuing U.S. war in Afghanistan, torture, the detention center at Guantanamo, weaponized and spy drones, the prosecution of whistle-blowers, U.S. support for the Israeli occupation of Palestine and repressive regimes.

On 28 April 1915, during World War I, a unique group of 1,136 women from warring and neutral nations gathered in The Hague, the Netherlands, to discuss how to end the war and ensure permanent peace. The meeting ended with the foundation of the Women’s International League of Peace and Freedom. 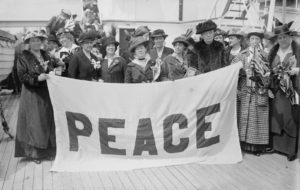 The organizers of the congress were prominent suffragists, who saw the link between their struggle for women’s right and the struggle for peace. They believed that the full and equal participation of women in the decision-making processes was necessary to achieve sustainable peace.