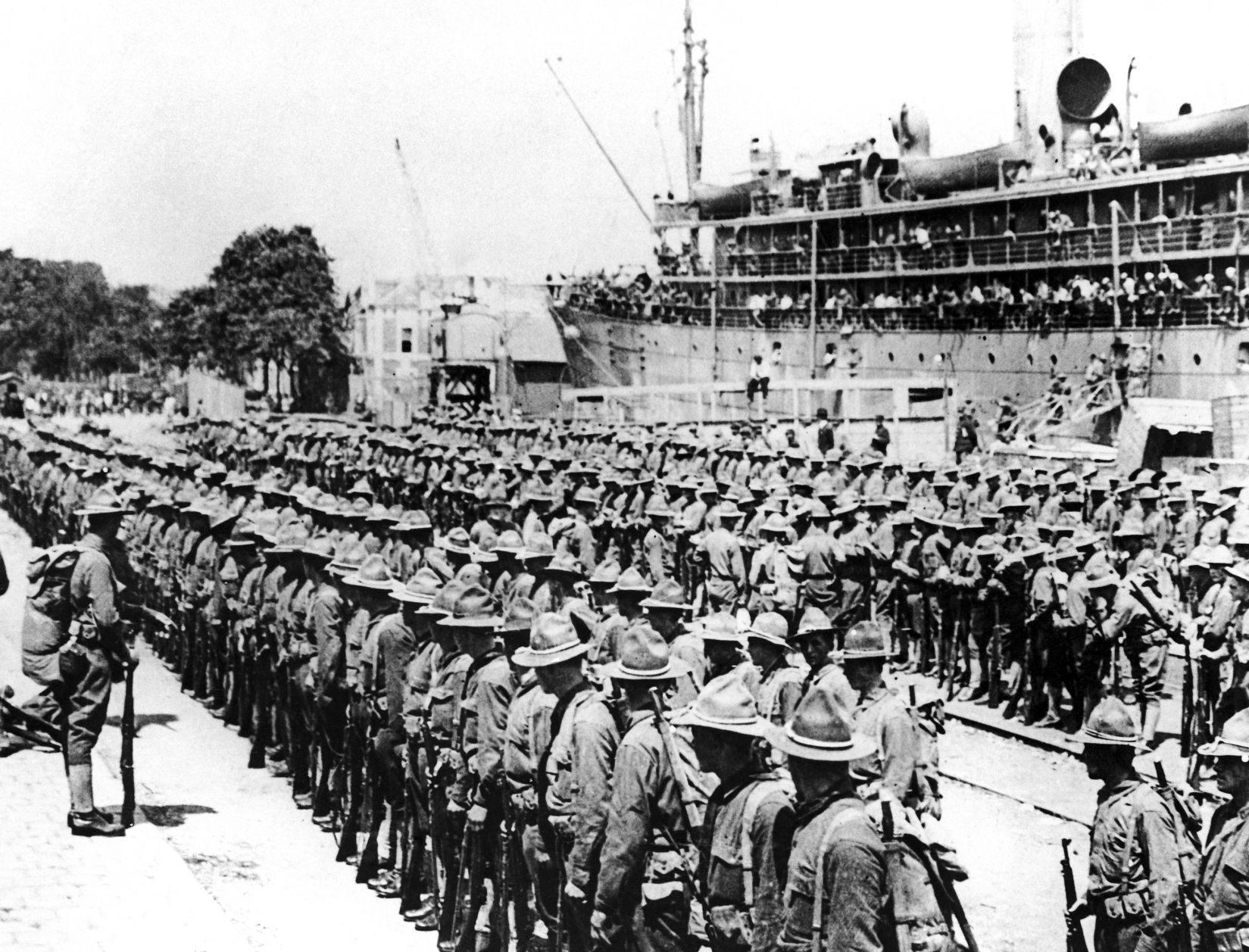 On June 26, 1917, the first troops of the American Expeditionary Force deployed to France during World War I landed in St. Nazaire.

World War I was the war that turned Wisconsinites against war.

The conflict was so reckless, so brutal, and so completely unnecessary that for generations after its conclusion on Nov. 11, 1918, the awful memory of “the war to end all wars” has inspired a distrust of militarism and war profiteering that has always run deeper in Wisconsin than most states.

Before World War I, Wisconsinites were justifiably proud of the role our abolitionists and soldiers played in the Civil War struggle to end human bondage. So this was not a pacifist state. But World War I taught thinking Wisconsinites that not all wars were good. And that some could be very bad, indeed. So it is that, as we mark the 100th anniversary of the 11th hour of the 11th day of the 11th month — the official ending point of that first global conflict — we honor the long dead sons of Wisconsin. But we also measure the lingering cost of choices that broke faith with an American experiment that began in revolt against empire builders and their imperialist designs.

The thing about World War I is that Wisconsinites knew even before the U.S. entered the conflict of kings and kaisers that it was not our fight. U.S. Sen. Robert M. La Follette, the former governor and eventual independent progressive presidential candidate, led the opposition to President Woodrow Wilson’s rush to war. La Follette raged against the president’s scheme to send the sons of farmers and shopkeepers and factory workers to die in support of George V and British colonial power.

Wilson, who had been re-elected in the fall of 1916 with the slogan “He Kept Us Out of War,” announced in April 1917 that “America is privileged to spend her blood and her might” in “the most terrible and disastrous of all wars.” The Senate was poised to consent to the president’s folly. But La Follette objected, forcing a debate in which he argued: “If it is important for us to speak and vote our convictions in matters of internal policy, though we may unfortunately be in disagreement with the president, it is infinitely more important for us to speak and vote our convictions when the question is one of peace or war, …”

La Follette described opposition to U.S. entry into the European conflict — reading aloud from petitions and the referendum results of Monroe, Wisconsin (954 against war, 95 in favor). He counseled: “The poor, sir, who are the ones called upon to rot in the trenches, have no organized power, have no press to voice their will upon this question of peace or war; but, oh, Mr. President, at some time they will be heard.”

Only a handful of senators joined La Follette in opposing the declaration of war. In the House, of the 50 anti-war votes, nine came from Wisconsinites. They were joined by Socialist Meyer London from New York City and the first woman to serve in the Congress, Jeannette Rankin, who explained: “I want to stand by my country, but I cannot vote for war.”

The war was as awful as Wisconsinites had feared. In less than two years, 117,000 Americans were dead, while more than 200,000 had been wounded. La Follette was initially vilified for his opposition — with only one daily newspaper, The Capital Times, taking his side amid calls for his expulsion from the Senate.

As the war was ending, however, voters in Milwaukee elected as their congressman Socialist Victor Berger, who campaigned on the slogan “For a Speedy and Lasting Peace, Tax the Profiteers.” And when La Follette sought re-election in 1922 — after declaring: “I do not want the vote of a single citizen under any misapprehension of where I stand: I would not change my record on the war for that of any man, living or dead …” — he was re-elected with 80 percent of the vote.

The legacy of La Follette’s courageous opposition to World War I extended across the decades. The two U.S. Senate votes against the 1964 Gulf of Tonkin Resolution, which committed the United States to all-out war in Vietnam, came from Oregon’s Wayne Morse, a Wisconsin native who had imbibed La Follette’s anti-imperialism as a youth, and Alaska’s Ernest Gruening, the spokesman for La Follette’s 1924 presidential campaign. In 1968, Eugene McCarthy brought his anti-Vietnam War presidential campaign to Wisconsin in large part because of the state’s history of opposition to military adventurism. George McGovern did the same in 1972 and, as recently as 2016, Bernie Sanders recalled La Follette as he campaigned in the state.

Former Sen. Gaylord Nelson’s opposition to the war in Southeast Asia and former Sen. William Proxmire’s scrutiny of Pentagon abuse was grounded in lessons learned from the foes of World War I and the profiteers who capitalized upon suffering. Sen. Russ Feingold referenced La Follette when he opposed the USA Patriot Act in 2001 and George W. Bush’s rush to war in Iraq in 2002. So, too, did Tammy Baldwin, who as a House member sided with Feingold and La Follette’s legacy on those critical votes. Congressman Mark Pocan, who holds La Follette’s old House seat, has been a steady critic of militarism and of the “dollar diplomacy” that his predecessor decried. When President Trump nominated ExxonMobil CEO Rex Tillerson to serve as secretary of State last year, Pocan warned about those who would “place profit margins ahead of diplomacy.”

That was La Follette’s language, echoing across a century — as true, and necessary, as ever. We have not forgotten World War I. We will garland the graves of the dead, once more, on this Nov. 11. And we well recall the words of the senator who warned before the U.S. entered World War I that “this war is being forced upon our people without their knowing why and without their approval, and that wars are usually forced upon all peoples in the same way.”

John Nichols is associate editor of The Capital Times. jnichols@madison.com and @NicholsUprising.