“In everything you do, Let it be like Art.” 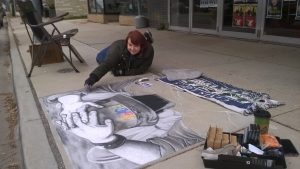 Amanda Zehren explains that her art is a tool to be used to spread love and humanity. “I work with many mediums and almost all of my artwork is inspired by nature.”

“Armistice Day, the annual holiday held on Nov. 11, was a day to celebrate the end of a bloody war and promote world peace. But since it became Veterans Day, it often seems to be more of a celebration and display of militarism. This year, the 100th anniversary of the end of World War I, is a time to reclaim the day for peace. ..” – Bill Christofferson served in the U.S. Marine Corps in Vietnam and is a member of Milwaukee Chapter 102 of Veterans for Peace. 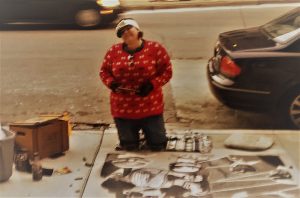 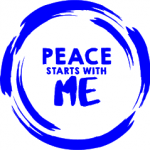 The Grass is Greener-2018-11-03 Amanda Zehren: Art for Armistice Day
Amanda is a professional artist who does competitive sidewalk murals. We talk about her planned recreation of the iconic “Flower Power” photo outside Milwaukee City Hall, which she will be installing the afternoon before. 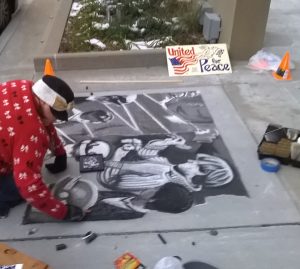 It was a cold, cold windy day but she persisted.

“The event is a reminder that Nov. 11 – now a day to honor veterans – was established as a day to promote world peace. World War I, the “war to end all wars” ended on the 11th hour on the 11th day of the 11th month of 1918. Twenty million soldiers and civilians had been killed, and almost an equal number wounded.”

This chalk art piece is after a famous photograph called “Flower Power.” The photo was taken by Bernie Boston on October 21, 1967 during an antiwar march on the Pentagon. A man is seen placing carnations into the barrels of the rifles of a military police battalion.

Flowers, Guns and an Iconic Snapshot

Makes me wonder if there were chambered rounds in those rifles. 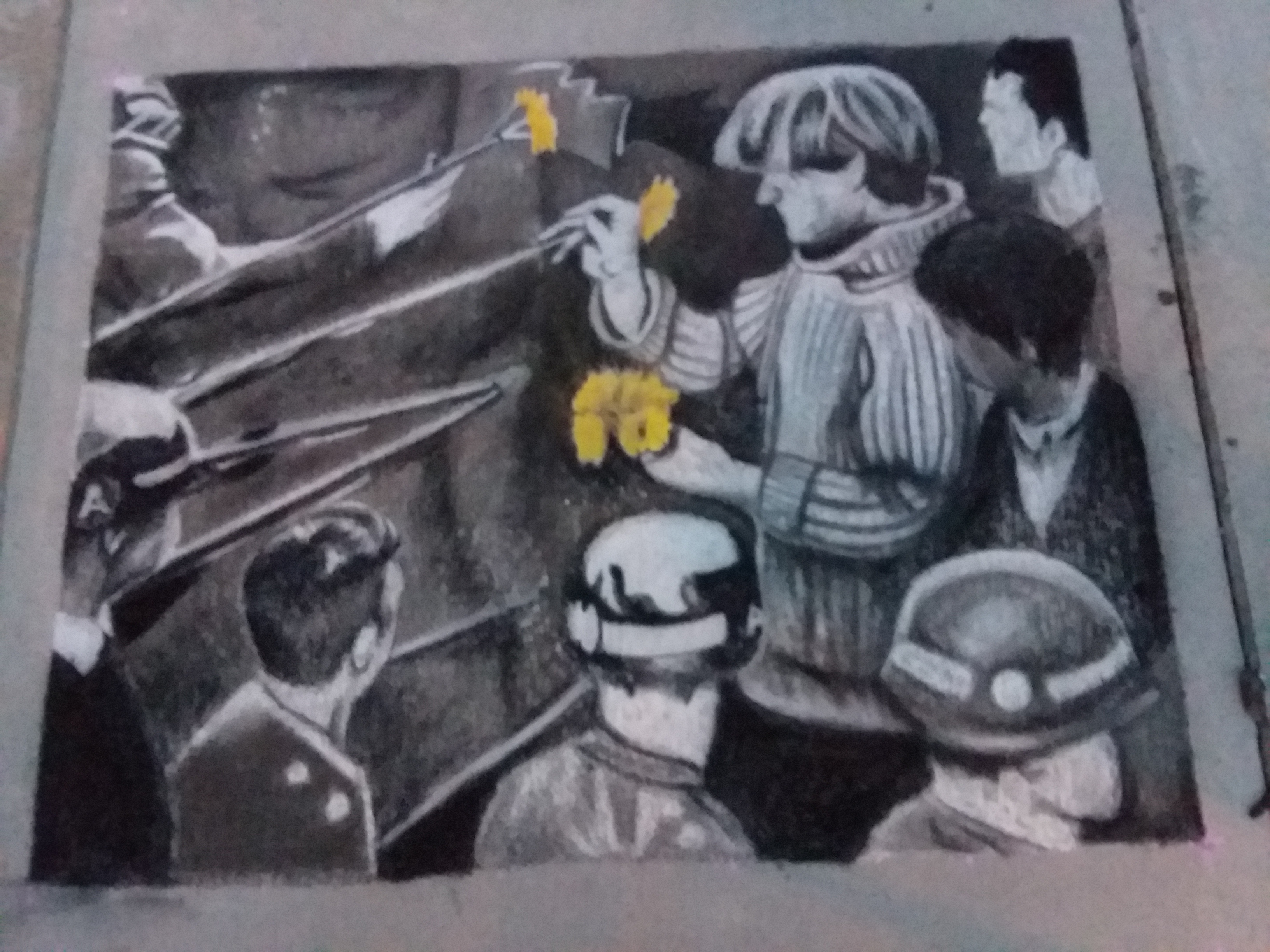 On November 11th, the Barrymore Theatre in Madison  hosted a live music show

The Greatest War examines why this history is relevant today in a multimedia, live music exploration presenting new music featuring the music and lyrics of The Kissers, Sean Michael Dargan, November Criminals, and The Viper and His Famous Orchestra and graphic art in the background to help tell the story. 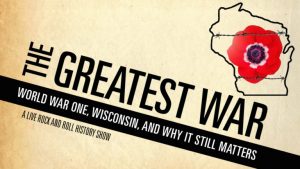 More music and pictures leading up to the event. 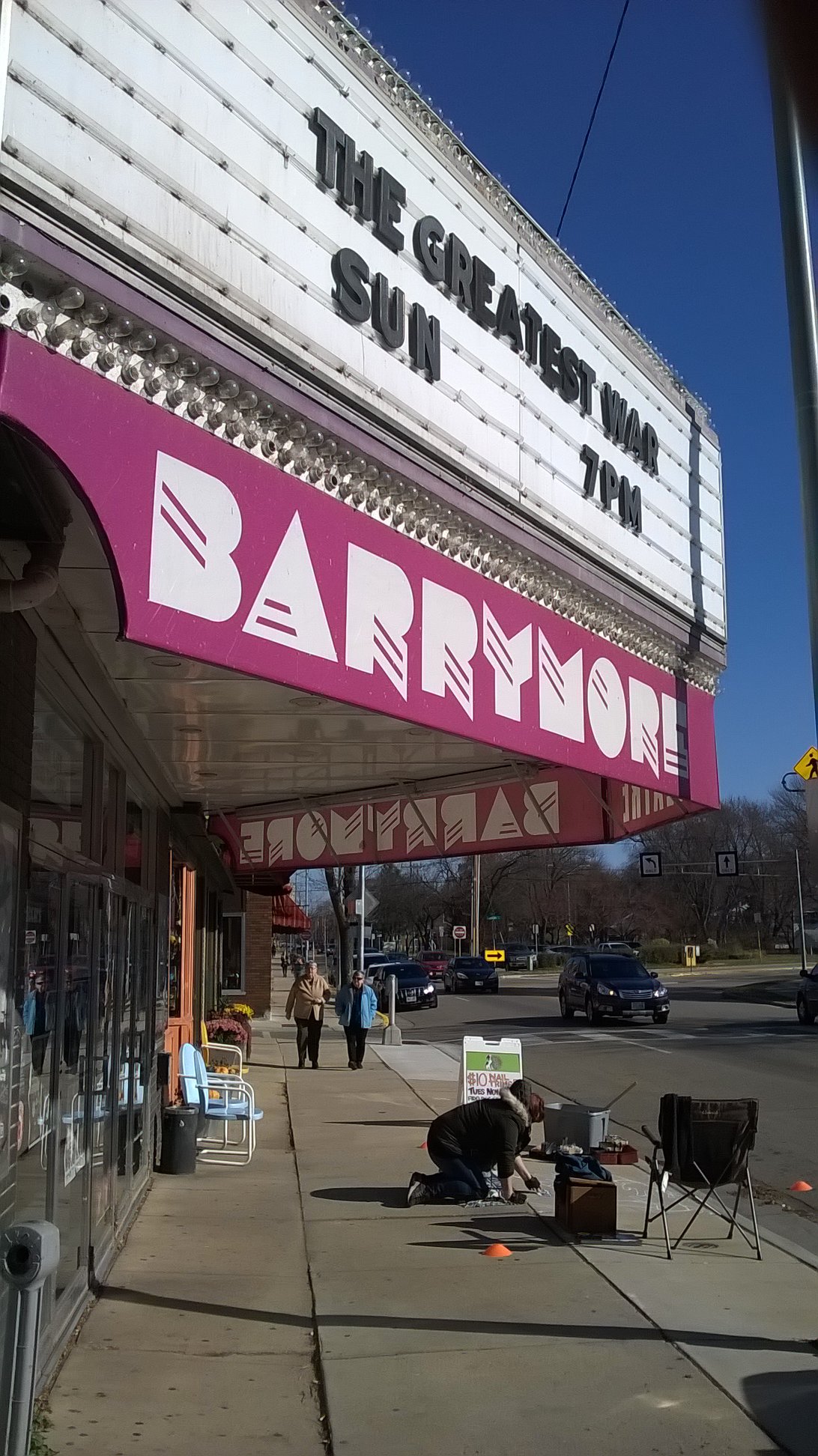 “On November 11, 2018 Madison, Wisconsin will join [ed] the world in commemorating the 100th anniversary of the armistice that ended World War One. Presenting new music inspired by the “The War to End War,” this rock ‘n’ roll history show will explore the conflict and the effect it has had on Wisconsinites then and now. 21 songs about the people and events will be performed in front of a giant video wall displaying photographs, film, and newspaper headlines from the time. Songs will often be introduced through readings of letters and diaries from people overseas and at home.” – Greatest War Website 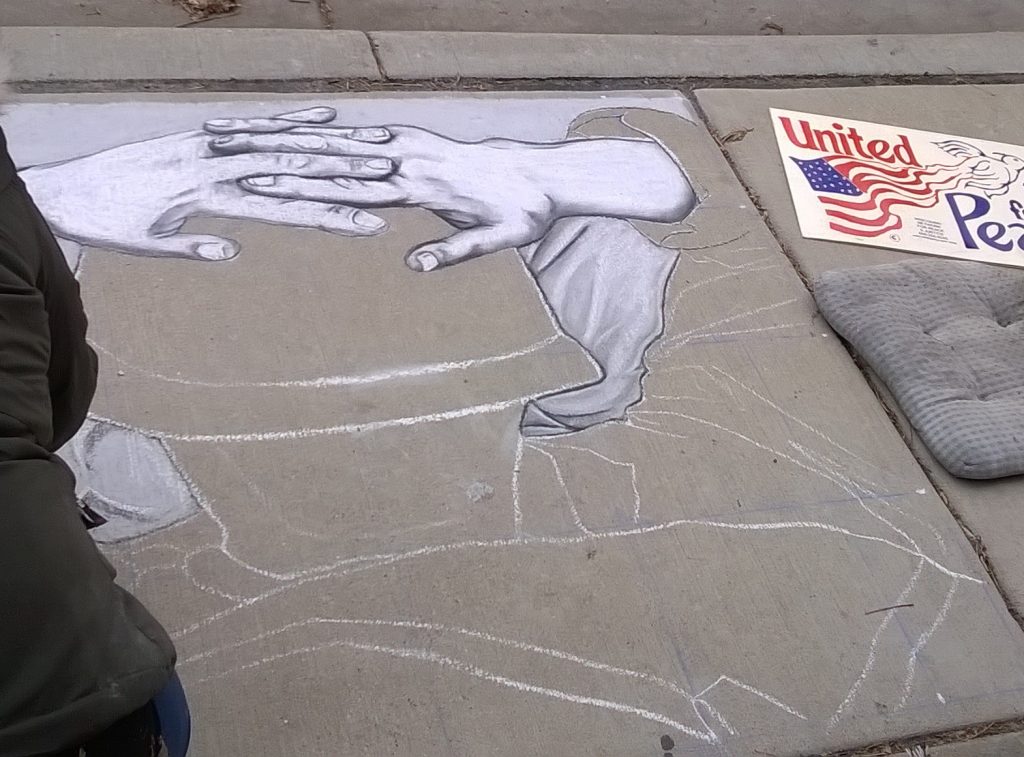 Armistice Day was originally a day to celebrate peace and an end to war. Veterans for Peace sees this as the best way to honor veterans.  The goal of war should be to end war, that especially is the goal of those who serve.

I hate war as only a soldier who has lived it can, only as one who has seen its brutality, its futility, its stupidity.  – Dwight D. Eisenhower 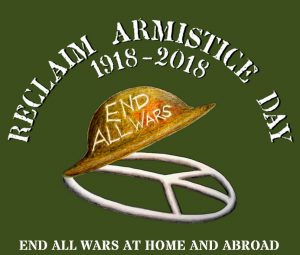 The 100th Anniversary of the End of All Wars

“We want generations after us to never know the destruction war has wrought on people and the earth.

Veterans For Peace is calling on everyone to stand up for peace this Armistice Day. More than ever, the world faces a critical moment. Tensions are heightened around the world and the U.S. is engaged militarily in multiple countries, without an end in sight.

Here at home we have seen the increasing militarization of our police forces and brutal crackdowns on dissent and people’s uprisings against state power. We must press our government to end reckless military interventions that endanger the entire world. We must build a culture of peace.

This Armistice Day, Veterans For Peace calls on the U.S. public to say no to more war and to demand justice and peace, at home and abroad. We know Peace is Possible and call for an end to all oppressive and violent policies, and for equality for all people.” 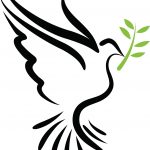 An American soldier wearing a helmet declaring “peace”, relaxes during the troop’s return to South Vietnam after operations in Cambodia. 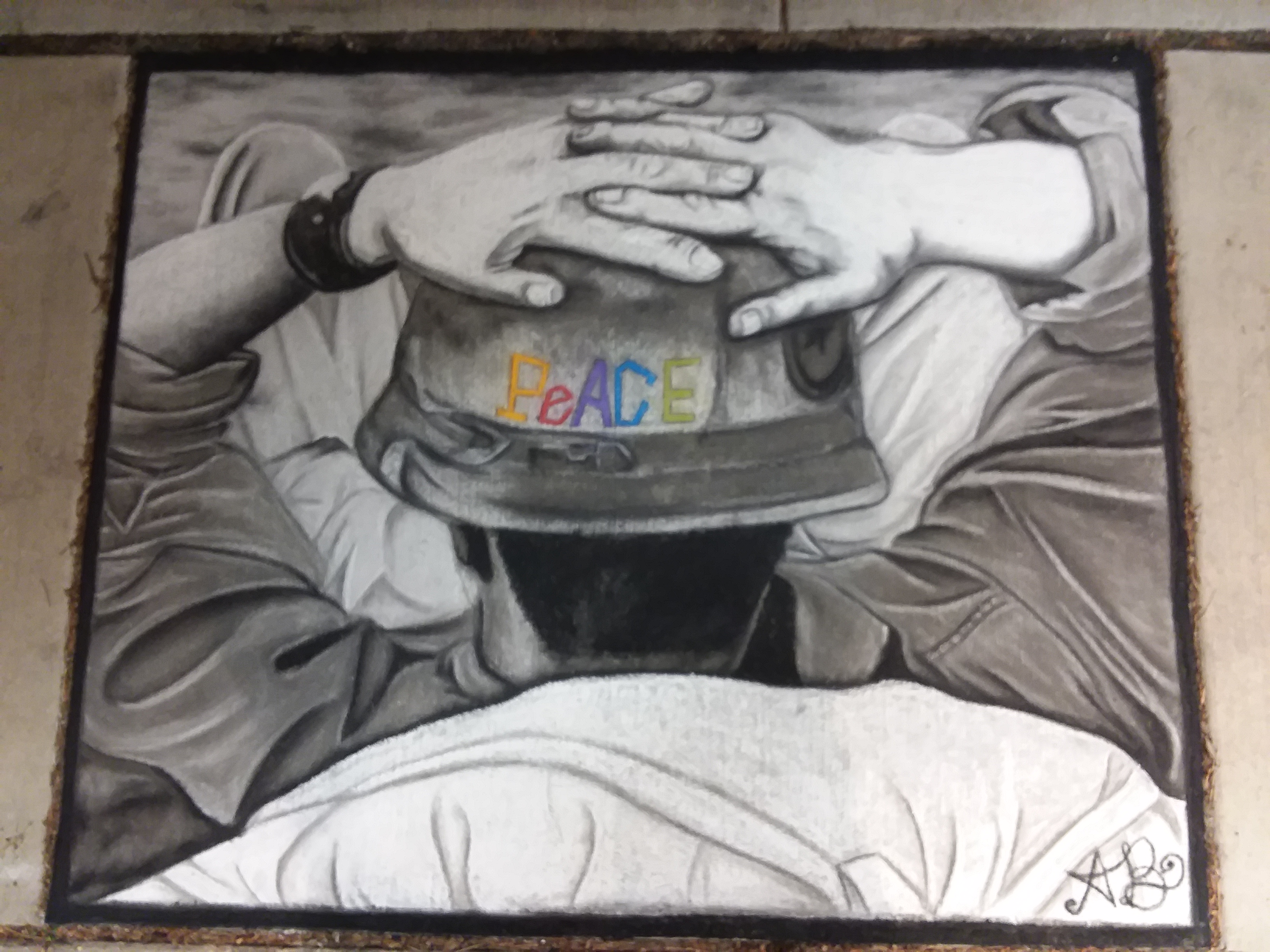 You can reach Amanda Zehren

“My art story starts with my first grade teacher approaching my mother and telling her, “You know Amanda is a wonderful Artist. She puts details in her drawings much more so than all of her classmates.” She showed my mom a picture I drew and stated, ” Look at the eyelashes so beautifully drawn.”

Soon after that encounter with Miss Krein, my mom gave me my first sketch book. I even remember the way that book felt in my hands. I started it at age 6 and finished it at age 12. Every year my pictures getting more and more detailed as I practiced. Creating things with my hands has always come easy to me like a magical power. “Chuckle”, if only everything else about life was so easy. Life on the other hand has been incredibly hard and choosing to see the beauty of the world around me rather than the suffocating doom is what has made my life beautiful and unique.

My family supported me so much growing up. They were always awe struck by what I did, showering me with compliments. It was all of those compliments and encouragement that kept me going, kept me drawing, practicing, wanting more. There was never a time in my life when I wasn’t the Artist. I ate art for breakfast and lived on the high of making people smile. In high school I would skip lunches to go up to another class my Art teacher was instructing. All of my Art teachers welcomed me, taught me and made it so that my creative freedom would be limitless.

My Senior year in high school was made up of all Art classes with the exception of one math class. Art and Earth Science were the only classes I got straight A’s in. As is with anything you love the most, it was what I was best at and most hungry to learn about.

Now here I am as a mother doing my Art right along side my also incredibly artistic family. Hungry to learn, create and spread joy through my Art. In my Art you see all the many things I love. It personifies who I am and what I feel so deeply. My Art is my expression of the world I see in it’s endless and magical God created beauty. I’m beginning to get used to the idea of selling my art, although it’s hard for me. I’ve always gotten so much joy out of giving my art away for free. It’s my favorite way to spread love and humanity. Love and humanity is so desperately needed in this world today.

If I can make the world a better place through art, there is no stopping the art that is inside of me. So here I am and here I strive on to become an artist of the fullest potential fulfilling my destiny the universe has created for me.”

More from Veterans for Peace-National on Armistice Day History

3 thoughts on “Armistice Day Art Pieces for Veterans for Peace”