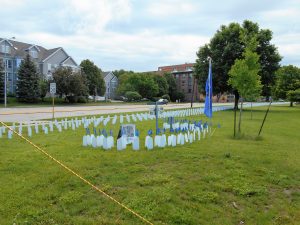 This circle of markers was included in the Memorial Mile this year for the 1st time to highlight the 130 + Wisconsin service members who were killed in Afghanistan and Iraq. Their names, unit, hometown, picture, date of death could be read by those who stopped and took special interest to see if a loved one was listed. Photo by Barb Glassel 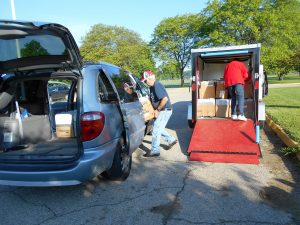 Phil Fransen and wife transfer boxes holding almost 7,000 markers from his trailer to Tom Glassel’s van that was then driven with the boxes being dropped off at various spots to be installed by several crews of VFP members and volunteers. There was plenty of food and coffee for everybody. The process is reversed in removing the markers and getting them all back into Phill’s trailer and then to his garage for storage until next year. Photo by Barb Glassel 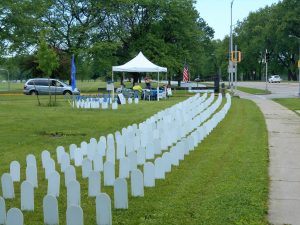 Here is a view of a portion of the 7,000 markers installed by the Vets For Peace Clarence Kailin Madison Chapter 25 along Momona Dr. that represent American Service Members killed in Iraq and Afghanistan. A separate installation is shown here in the semi-circle formation next to the tent that represented the over 130 Wisconsin service members killed in Iraq and Afghanistan from 2003 -2015. Featured were their Names Pictures Home Town and Unit of the individual. Many citizens stopped to make donations and to share memories. Thanks to members and volunteers who helped to install this annual project in about 2+ hours and then taking it down 7 days later. Photo by Barb Glassel.