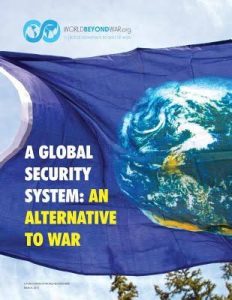 Title: A Global Security System-An Alternative to War Authors: The Staff of World Beyond War and Members of its Coordinating Committee

Reviewed by: Randy Converse, member of Chapter 25, Veterans for Peace

This book describes the “nuts and bolts of a concrete alternative to war as a means of conflict resolution and the mechanisms to create a culture of peace to support such an alternative system. The sections that I feel are the most intriguing are:

Creating a Culture of Peace

In the Demilitarizing Security section, the authors suggest the ultimate form of national defense would be a nonviolent civilian defense force. This force would deter attacks by engaging in a variety of nonviolent tactics to make our country more resistant to rule by aggressors. A first step toward such a force would be to have a truly non-provocative defensive military posture. Such a posture would eliminate long-range weapons such as intercontinental ballistic missiles and militarized drones and phase out overseas military bases.

In Creating a Culture of Peace, suggestions are given on how to debunk war myths (i.e. war is inevitable and World War II was a “good war”). The importance of funding peace education projects is stressed. An example of a successful education project of the Chapter 25 Veteran’s for Peace is a scholarship program for high school youth that is based on an essay “Why war is not the answer”.

A Global Security System: An Alternative to War is a concise and quite readable section. It gives a detailed blueprint to present in outreach efforts when people say, ”War is horrible, but what’s the alternative?”

First Edition from 2015 is here in multiple formats.